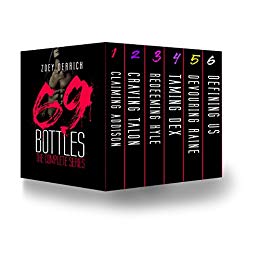 THIS IS A BOXSET that contains 6 FULL Length Novels about the Rock Band 69 Bottles.

For Addison Beltrand, PR rep for Bold International, Inc. climbing the corporate ladder is all that matters in life. Her hard work is finally rewarded with the promotion she’s worked her ass off to earn—but the gig comes at a price. She leaves in two days for a twelve-week tour with America’s hottest alternative rock band, 69 Bottles.

Talon and Kyle push their boundaries and Addison’s, but can they throw their reservations to the wind and claim her together?

Two men. One woman. A rock band. A tour bus. One Wild Ride…

Dex Harris, Drummer for America’s Hottest Alternative Rock Band 69 Bottles, has never gone looking for love—for good reason. After an ill-fated night after a tour stop in Phoenix, his wicked demons resurface. Is he strong enough to resist falling back into the black hole that was once his life or will he let addiction consume him?

Defining US: The Calvin & Eric Story: Book #6 in the 69 Bottles Series.

Loving someone completely means giving them your heart, soul, body and mind. What happens when your heart and soul love someone, but your mind and body refuse to follow?

For Calvin Caldwell, being the lead guitarist of America’s hottest rock band 69 Bottles has its perks. Performing night after night with his closest friends, he finds peace with a guitar in his hands. Playing music wipes away his unimaginable past, albeit temporarily. He struggles not only with who he is as a person, but with who he wants to become and what he is hiding.

Get 69 Bottles: The Complete Box Set by Zoey Derrick at Amazon