You are here: Home / Genre / Bisexual/Transgender / A Sheriff for Two Bears (Bear Mountain Book 10) by Kelex 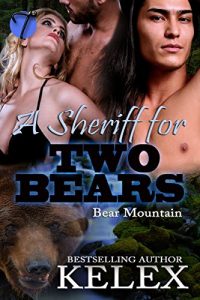 Joshua Running Bear’s life is in turmoil. The thousand-year-old shaman no longer hears the voices of their ancestors, not after his successor is born. He’d expected to die when they no longer had need of him, so he’s surprised when he begins to grow younger by the day.

But not as surprised as he is when he finds a new mate—and a female bear shifter at that. The closer he tries to get, the more Hannah pushes him away. Not all is as it seems with the shebear, and he’ll soon learn the deep, dark secret she holds close.

Joshua also feels a pull to the reservation’s sheriff, Mattheu. Mattheu’s not his mate, but there’s something pushing them together. Only adding more craziness to Joshua’s life, a killer is on the hunt for Mattheu.

Can Joshua keep them safe long enough to claim them both?