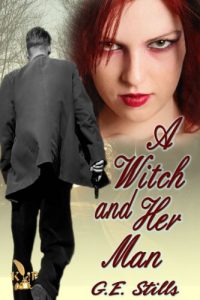 For the 18+ reader
Gail is a very frightened lady. She is getting death threats over the phone and someone has been in her house while she was at work. In desperation she employs Jeff, a PI-bodyguard, for protection and to find the one or ones responsible. During the course of their first face-to-face meeting Gail informs him she is a witch. He makes light of her revelation but soon discovers she is serious in her claim.

She accuses him of being cocky but she discovers he is not just bragging. He is very good at his job. From the start they find each other mutually attractive physically and a short time later, in personality.

Despite his vow to himself to resist, Jeff finds himself more attracted to her every day they spend together. Gail, for her part, does not make his resistance easy. She torments and teases him continuously.

Despite his protection, will she be killed or will he find the ultimate source of the threats? How will he deal with it if he does?

Get A Witch and Her Man (Gail and Jeff Book 1) by G.E. Stills at Amazon