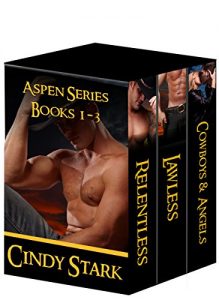 From bestselling new author Cindy Stark, meet the sexy heroes of the small town of Aspen, and let their romances heat up your nights and warm your heart.

Lily Chandler lost her job and lost her apartment. The last thing she wants is to lose her heart to a small-town sexy cowboy who is known to love ’em and leave ’em.
Rumored bad boy Luke Winchester needs to shed the reputation he hasn’t earned if he wants more than a stolen kiss from Lily. Unfortunately, the scorned woman who stands in his way happens to be Lily’s best friend.
Lily intends to steer clear of temptation and remain loyal to her friend, but Luke’s subtle yet relentless pursuit weakens her with each encounter. If she gives in, will she become another notch in his belt or find the love she’s always longed for?

She committed the ultimate sin…
Ariana Trasatti betrayed her father, an organized crime boss, when she agreed to testify against him. Now the family will stop at nothing to silence her. But after eleven months in the witness protection program, her sanity is in as much danger as her life. When threatened with exposure, she’s thrust into the care of a sexy small-town lawman who seems intent on distracting her from her fears.
He’s searching for redemption…
Deputy Sheriff Milo Sykes couldn’t turn down his old buddy’s desperate call. There’s a leak in the U.S. Marshals Service, and Milo is the only man he can trust. Milo never thought to provide protection for another witness, not after the tragedy he can’t put behind him. But, one look into Ariana’s eyes, and he knows he’ll give his life to keep her safe.
Nothing is what it seems…
Milo soon realizes his biggest challenge isn’t protecting Ariana from the mob, but protecting her from him. Temptation draws them in and passion ignites their world. But they’re both headed for heartache when her past finally catches up to her.

Katy Rivers’ life has been perfect so far. Perfectly boring, that is. She’s lived by the rules and made all the safe choices. She has a great accounting job, her own home, and…zero fun. She’s looking for a taste of excitement, but she gets more than she bargained for when the sexy, but off-limits bad boy she dreamt about in high school is suddenly back in her life and wanting more than her number.
Scott Beckstead has grown up during the ten years since he dropped out of school. He’s no longer the bad boy the town remembers. He owns a profitable construction company and keeps his wild adventures just this side of legal. A chance meeting with Katy reminds him of the one thing he always wanted, but never thought he could have.
The holidays are a time to come together, but Katy’s family and friends are determined to keep her and Scott apart. If she wants Scott to stay and wants the passionate nights beneath the Christmas tree to become a tradition, she’s going to have to leave “safe” behind.