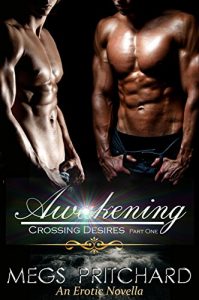 An erotic novella. Contains homosexual relations.
Tony likes women. Always has. Always will. So when he wakes up in a strange bed after a drunken night out, he isn’t too concerned.
Thinking he’d scored with a woman from the club he’d been in the night before, he was shocked and horrified when he realized he was in a man’s bed. Naked.
What the hell happened last night?
With that question in mind, Tony quickly leaves before seeing the man he spent the night with, but in his haste leaves something important behind.
When the man he spent the night with calls him, Tony realizes that he has to meet him in order to get back what he left and that maybe he might not be as straight as he once thought.
With his brother’s help, Tony begins to question what he thought he knew about his sexuality and where the answer to that question might lead him.

Get Awakening: Part One in the Crossing Desires Series by Megs Pritchard at Amazon