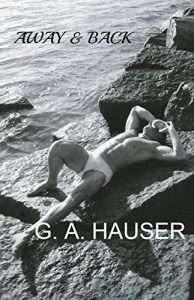 Forty year old Los Angeles attorney, Channing Preston, faced a tragedy parents fear the most, he lost his fourteen year old son, Gerry. Even though the incident was seven years ago, the anguish that destroyed his marriage and nearly destroyed him, still haunts him.
While reading the newspaper Channing sees a photo of a local man who is being selected to a new job with a city office. When he reads the name of this man, his heart stops.
Could his son be alive?
Channing hires the firm’s private investigator immediately to find out.
What Channing discovers is not good news, but the interaction Channing has with the individual who has taken his son’s identification is confusing at the very least.
A father who has lost it all and a mysterious man that appears out of nowhere.
Two men; both victims of tragedy meet in the most bizarre circumstance.
Away & Back. Was it possible to get back what you thought you had once lost? It’s something Channing is going to find out.

(This novel is a gay romance and contains adult content)

Get Away & Back by G. A. Hauser at Amazon