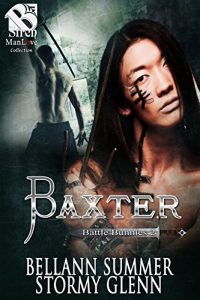 [Siren Everlasting Classic ManLove: Erotic Alternative Paranormal Romance, M/M, werewolves, shape-shifters, HEA] They know a thousand ways to kill…and zero ways to love. Baxter is the Battle Bunny everyone stares at. He’s pierced in places that make life interesting, as snarky as they come, and so lonely his heart screams out for someone to simply acknowledge his existence. When someone does, Bax feels as though he has to fight everyone, including his own brothers, to keep the man that speaks to his soul. Dominic O’Leary had been the alpha of his pack when they were betrayed and turned over to the scientists. By the time he escaped, his pack was decimated and Dominic and his brother had been changed forever. Discovering his mate among a family of bunnies should have brought him great joy, but the scientists took that from him with their sick experiments. When Baxter’s family prevents him from claiming his mate, Dominic must use an ancient and seldom used law to force them to allow him time with Bax. But an interfering family seems to be the least of their problems. People are getting sick, the baby won’t stop crying, and the vampire who owns their abandoned mansion is back. No one ever said life was easy, but does it have to be so damn hard? ** A Siren Erotic Romance Bellann Summer and Stormy Glenn are Siren-exclusive authors.