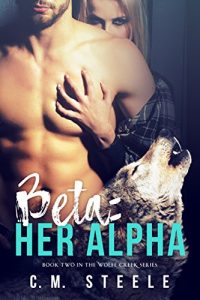 Falling in love isn’t something wolf shifters do with just anyone. They have only one mate for life. So what is wrong with Chloe Grey? As a twenty-three-year-old female shifter she’s already past her mating prime when she scents Erik Smith, the local sheriff. While she’s attracted to him her mating instincts don’t kick in. Are her instincts off or is he not meant for her?

From the moment they met, Erik can’t stop loving the Alpha’s sister. Seeing Chloe has become a must, but he knows the pain of watching her find her mate will kill him. He’s torn between staying or moving on away from Wolfe’s Creek.

The unbearable reality of an impossible future together forces them to snip at each other’s throats. By the time Wolfe’s Den opens up, both of them are at their breaking point. Can they be wrong about their feelings or will fate step in and make things right?

Although it’s a standalone, it’s the 2nd book in the Wolfe Creek Series.

Get Beta: Her Alpha (Wolfe Creek Book 2) by C.M. Steele at Amazon