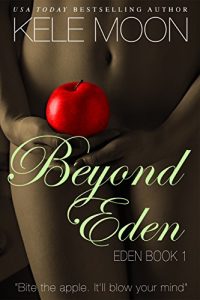 **Read the book everyone’s talking about with this re-released, extended version of Beyond Eden—The original, darkly sexual love story that’ll leave you questioning everything you know about good and evil**

Tall, dark and handsome Danny Carlow has always gotten whatever he wants except for the two he desires more than anything—his best friends, lovers Paul and Eve. Determined to claim what was never supposed to be his, Danny waits like a snake in the grass, poised for the right moment to offer them a temptation too delicious to resist.

Artist Eve Everton made the painful decision to leave her true love Paul for the siren call of New York City. Now ten years later, with her life in shambles, she returns. When Paul’s waiting arms aren’t available, Eve falls for Danny’s charm and finds herself a willing accomplice in the dangerous games Danny plays.

Paul Mattling is a successful attorney with a bright future ahead of him, but behind those brilliant blue eyes are secret desires for a taste of the forbidden. Will he play it safe or give in to Danny and Eve and bite the apple?

Get Beyond Eden by Kele Moon at Amazon