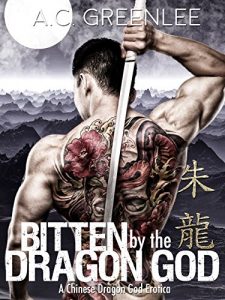 NOT A NOVEL
Feisty English Teacher Corrine Warren just landed the job of a lifetime teaching underprivileged kids in China. With the keys to her first apartment in hand and success within reach, she is jumped by a pair of cheeky mobsters and whisked away to await the judgement of the Dragon Head, the notorious leader of the most vicious gang in the world; The Triad. Her crime? Being an American citizen in the wrong part of Hong Kong. Locked in the beautiful Shangri-La with no chance of escape, she is given a difficult test; assist in the murder of a US Mayoral candidate, or die.

Terrifyingly beautiful Tao is the Zhūlóng, the Vermillion Dragon and a formidable gang leader in his own right. After an unfortunate event that left a close friend dead, he’s spent centuries shirking his responsibilities as a God. But when a beautiful yet tactless mortal starts a shootout in his casino and consumes the Dragon Fire, thus marking her as his Mate, he can no longer out run his destiny. And, with a possessive, dangerously enigmatic Dragon on her tail, neither can she.

Corrine is faced with one of the most difficult decisions of her life; submit and forfeit herself to a God she just met, or walk away and deny herself the only real passion she’s ever felt. With the threat of a Dragon assassin on the horizon, Tao will do whatever it takes to claim his Mate, and in the process turn his beautiful Teacher into the brazen, carnal Goddess she was meant to be.

If you’re looking for quick and dirty with a storyline, this series is for YOU.

Get Bitten by the Dragon God (A Chinese Dragon God Erotica Book 2) by A.C. Greenlee at Amazon