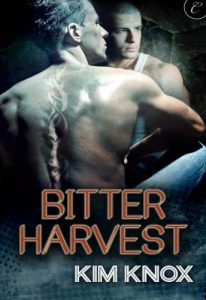 It’s 2050, and humans are an endangered species. Lieutenant Robert Sutton has survived the collapse of civilization by luck, his wits, and a chance mutation that makes him immune to the nano-virus that has wiped out millions. Now, his compound of survivors is surrounded by the infected, who are driven by the need to spread the contagion through sex. It is only a matter of time before they attack. So when Sutton is assigned to interrogate a prisoner who claims to have overcome the infection, he immediately suspects a trap…

Nicholas Rider may have survived the virus, but he’s a changed man, ruled by his desires. But his need for Sutton is different. Rider craves an end to his overwhelming needs, and Sutton could be the man to do it.

Secure in his belief that he’s invulnerable, Sutton can’t understand or resist his intense attraction to his prisoner. Will Rider be his downfall—or his savior?

Get Bitter Harvest by Kim Knox at Amazon
Get Audiobook