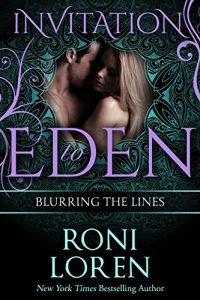 A year has passed since Gretchen lost her fiancé, but she still can’t sleep. Or paint. And her new home in New Orleans is either haunted or she’s finally going crazy.

Her bet is on the latter.

So when her best friend, Burke, offers to sweep her away to a private luxury island for a break, she can’t say no. Maybe if she can be someone else for a few days, the ghosts of the past will quiet. At least for a little while.

Burke knows what she’s going through. She lost her fiancé, but he lost family. He gets her in a way no else can. But lately she’s noticing things she shouldn’t about her former fiancé’s younger brother—his sexy smirk, that spicy Cajun accent, and the way he looks at her when he thinks she’s not paying attention. A week alone with him? Dangerous. If she blurs the lines between them, she could ruin the only friendship that means anything to her. She could ruin it all.

But the island of Eden has its own agenda. The island knows what you need. That’s what the invitation says. She just never imagines it will grant her the one wish that could destroy them both.

Contemporary Romance with a Paranormal Twist

*Part of the Invitation to Eden multi-author series but can be read as a standalone.