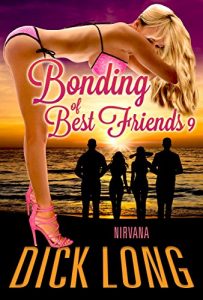 Bonding of Best Friends 9; Nirvana
Greta’s dream home is completed. Thanks to Uncle Rex’s additional funding her big house idea ended up a chic, well-equipped estate. Move in night the blonde bombshell calls to name the estate and ‘Nirvana’ is unanimously decided by the six.
While filling the wine racks in their subterranean dungeon, Rex shows his treasure with instruction of when and how his adopted sons should be informed of their wealth. Feeling safe and set for life, Aunt Vicky desires to contribute and takes Celeste and Greta on a five day deluxe shopping spree. Greta surprises them with a visit to their architect’s Miami mansion where they visit his dungeon and engage in scandalous dungeon behavior with Adam and thirty three of his hooded male friends.
Pussycat surprises her gal pals when Steve Silver flies the three of them to his resort where Greta and Pussycat are popular with the ‘sirs’. Curiously drawn to the same fantasy and thrill, Victoria is strenuously vetted by Steven and his security chief before being ‘walked’ to her first sirs’ bungalow. Adoring this paradise, she is accepted and to be included when her two girlfriends visit.
While the Nirvana women are on their spree, Ed knowing the three of them are no doubt doing more than shopping, invites Janice Joyce to be their first guest. Familiar with ‘the tribe’, as the people of Nirvana label their group, Janny J hears Rob’s longing for her friend in his voice whenever Leja’s name is mentioned. Secretly, she texts the night maid and tells of Rob’s feelings while noting the country address.
To Rob’s delight, Leja arrives the next day and they secretly enter into an ‘illicit marriage’ that she instigates. After consummation, they journey to the kitchen and meet Jerome and Thomas Sanford, Rex’s identical adopted sons. Having just graduated with their master’s degrees, they are corralled into staying on at Nirvana by first Leja followed by the busty Janny J seducing them.
Greta, Celeste and Victoria return, to find their two sex sister friends staying to help out with the housewarming party, enough time for them to become indispensable. Rob tells Celeste that, like Greta, Leja is now his ‘illicit’ wife and will sleep with them. Extremely fond of Leja, and feeling guilty after her numerous shopping spree trysts, Pussycat accepts the arrangement.
The housewarming party is a two day orgy where Greta and Pussycat confess their activities on Whore Island, the nickname for Silver’s Lost Paradise. A grad student friend of the twins, Adrien Alexander, is brought in to help with the housewarming. She and a tiny young party guest, Sonia Kennedy, are enlisted to stay on and help test an idea.
Vicky shares the insight with her wealthy friend and pimp, Steve Silver. Steve polishes the concept and presents it to the tribe as an opportunity before leaving the party. Victoria envisions a school where attractive, sexually focused young women polish their skills to be upgraded from good sluts into world class prostitutes for Lost Paradise. Adrien and Sonia become their ‘proof of concept’ test that Silver requires to start the school. As best friends and Greta’s long sought chosen family, they accept Silver’s challenge to spin good into great.

Get Bonding of Best Friends 9: Nirvana by Dick Long at Amazon