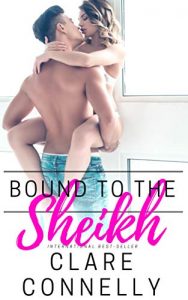 An ancient debt. A deathbed promise. A marriage of duty and obligation. Desire too strong to control.

Billionaire Sheikh Afida Masou-Al doesn’t like his bride-of-convenience. In fact, he positively loathes her. She’s the last person on earth he would have married were it not for an ancient debt and a deathbed promise. Now that it’s done though he decides to make the most of it! And there is one definite silver-lining to the whole debacle. His wife is sexy as sin. He doesn’t want her anywhere but his bed …

Laurie is under no illusions: this marriage of theirs is far from traditional. She and her groom are a total failure as a couple except in one crucial way. They can’t keep their hands off one another.

It’s a marriage of convenience with every reason to fail … but is it possible that hate at first sight could turn into something more?