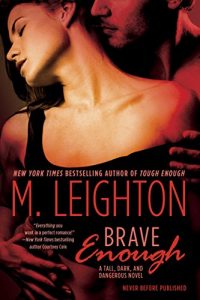 Is she brave enough to give her heart to a man she only thought she knew?

I couldn’t resist him. Even if I’d known who he really was and what he was really capable of.

When he suggested we pretend to be engaged, I thought he was the answer to all my problems. He wasn’t. And, in his wake, he left nothing but scorched earth and me, just another casualty of my father’s war.

Can I believe him now when he tells me he loves me? Or is he nothing more than a beautiful, breathtaking lie?

Get Brave Enough ("Tall, Dark, and Dangerous" Book 3) by M. Leighton at Amazon
Get Audiobook