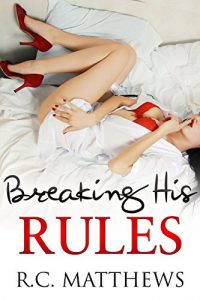 When I landed the best bartending job in downtown Chicago, the rules were as clear as the Grey Goose martini I mixed for him. Don’t sleep with the patrons. I had no problem with that. Money didn’t impress me. But Damon Baxter’s eyes did. Midnight blue, just like the name of his nightclub. The way they undressed me made me consider risking the most sought after job in the service industry. Nailing the position had been hard. Obeying the rules? Even harder.

Good thing I like it hard. I was never one for following orders. For one night with him, I would have sold my soul to the devil. And that’s exactly what I did. Let me tell you, hell in the company of Damon Baxter was blissfully hot. I offered him a single night of pleasure, but when he demanded another in that deep and sexy whisper, what could I say? He was my boss, and I always aimed to please…when it pleased me.

He didn’t care that I broke his rules. But was I ready to break my own?

Get Breaking His Rules by R.C. Matthews at Amazon