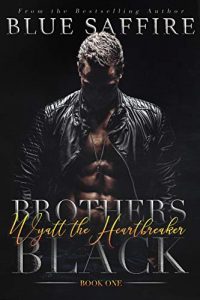 Brothers Black: Wyatt the Heartbreaker Book 1 in Brothers Black Series
I don’t just love my woman, I protect her, I provide for her, I would die for her. Nellie walked into my life when I needed her most. Now I’m not willing to let her go. I will destroy anyone that even thinks of harming my woman. Nellie is nothing like the women I used to bring pleasure to.
Oh Yes, I bring pleasure on levels that will numb your mind for months. When I lay eyes on Nellie, I know I want to bring her and only her that pleasure. I just need her to see past my past. I’m the oldest of seven hardheaded brothers. Some call me the ring leader, some call me the voice of reason, and everyone knows me as the heartbreaker. Only I never wanted her to know that. Now I’ll just have to show her that I can heal a heart much better than I can break one because I want hers.
I am running from my past. I never thought that I would run right into the arms of freaking Wyatt Black. I watched him break hearts from afar. The last thing I need is to be next. But like I said this is Wyatt freaking Black, the six foot three, golden eyed breathing definition of sexy. Women line up to get their hearts broken by him. So really how am I supposed to resist him?
I’ll give in and when I do, I’ll find that he is more than what I bargained for in so many ways. I mean in every way imaginable. If sex were a weapon Wyatt Black would be lethal. Who I am kidding Wyatt is lethal, especially when it comes to me. When the past comes to haunt us, Wyatt will always protect me, without thought, without question. Wyatt isn’t a heartbreaker, he is my heart healer.
Find out what happened to lead to the text message Nathan Briggs received at his wedding, in Legally Bound 3.
*This is Book 1 in the Brothers Black Series a spin-off from the bestselling Legally Bound Series placed after book 3 in the Legally Bound Series. While you can read this book as a standalone, it will enhance the read to read the Legally Bound Series first. Blue Saffire’s books are written to weave, loop and intertwine with one another. You will find that the series build together for a greater experience.
**This BWWM romance has strong language and sexual content. This Book is for Mature Readers 18+

Get Brothers Black: Wyatt the Heartbreaker by Blue Saffire at Amazon