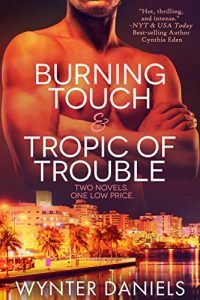 When Devon Wise’s massage clients start turning up dead, she reluctantly leans on the sexy guy next door to help her clear her name. Having lost her parents at an early age, she doesn’t trust that anyone she cares about will stick around. Devon never lets her feelings get involved, keeping everyone at arm’s length. But after their first sizzling night, she can’t get enough.

Real estate investor Ben Stafford can’t keep his mind—or his hands—off the earthy beauty who happens to be his new neighbor. When the bodies begin piling up, he wonders if she’s as innocent as she claims or if he’s been spending all those lust-filled nights with a killer.

When Kelsey Ackerman’s assistant at her used bookstore is murdered, the police label it a botched robbery by a desperate drug addict. But Kelsey suspects the perpetrator was looking for a rare Shakespeare volume that someone unknowingly donated. Now a killer’s sights are set on Kelsey.

Jail guard Jason Jones only wants to protect her, but after suffering a controlling father and an abusive ex-husband, Kelsey wants nothing to do with the confident, hot sergeant. Until the danger becomes crystal clear, and the only man who can save her is the very man she can’t resist.