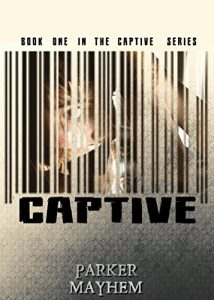 Freed from hell, only to be trapped in a nightmare.

Skylar’s life was a drug addled mess until her long distance mistress insisted she leave her shady past and move in. Now, in a new city, Kallie bends the rules to get Skylar a job so she can keep an eye on her and keep her under control. Life is a fantasy.
But when their kinky games leave the bedroom, their boss, Luce Sullivan, learns about their dirty little secret, and threatens them with their jobs. Skylar’s brand new life could be wrecked in an instant, and Kallie will go down with her, unless Skylar submits to a new mistress.

Get Captive: Captive Bk 1 by Parker Mayhem at Amazon