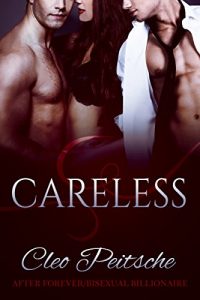 After being forced out of his company, Nelson returns home a billionaire with a hole in his life. When he meets Kimberly and Samuel, he decides he’ll have them both.

Kimberly would marry Samuel in an instant if he asked. He’s just not interested. But a single night to satisfy her curiosity is better than never knowing Samuel’s kiss.

There’s no way for Nelson, Samuel and Kimberly to all get what they want. One careless moment of weakness has the power to destroy them.

This tale contains explicit sexual content and graphic language that may be objectionable to some readers. Includes multiple partner interactions, sexual dominance and submission, male/male and m/m/f scenes. New adult. For adults only.

Get Careless (After Forever Book 1) by Cleo Peitsche at Amazon