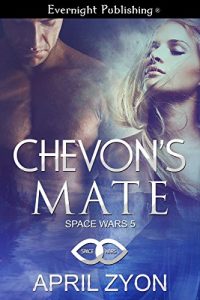 Dumping her fiance and going on their honeymoon alone was the best thing Laura Troxell had ever done. Too bad she had seen and heard too much and created enemies that wanted her dead.

Chevon von Janus simply wanted to mold the men and women that boarded his ship into the best Imarian officers they could possibly be. A general in his own right, Chevon was a trainer, but he was also a warrior. When his ship’s sensors picked up a strange object near an asteroid field, he felt it was his duty to investigate. What he found inside, however, threw the straightlaced general for a loop. The woman was from enemy territory. She was also his mate.

Now he has to figure out how to keep her safe from his people and hers.