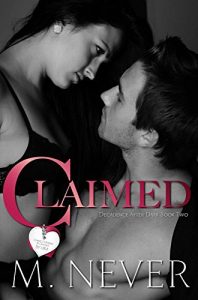 “No matter where you go or who you’re with, you’ll always be mine.”

Ellie Stevens thought she had moved on from the domineering man who abducted her. Now living in Hawaii and following her dreams, no one is going to keep her down. But things aren’t always as they seem.

Kayne Rivers reluctantly let Ellie go, but just because she’s gone now, doesn’t mean she’ll be gone forever. She is his, and he won’t stop until he’s reclaimed her as his own.

Get Claimed (Decadence After Dark Book 2) by M. Never at Amazon
Get Audiobook