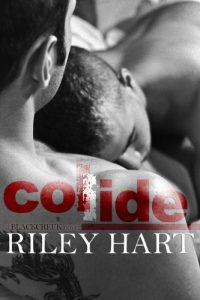 At ten years old, Noah Jameson and Cooper Bradshaw collided mid-air when they dove for the same football. For three years, they were inseparable…until one day when Noah and his parents disappeared in the middle of the night.

Noah and Cooper never knew what happened to each other. Now, seventeen years later, after finding his boyfriend in bed with another man, Noah returns to Blackcreek looking for a fresh start. And damned if he doesn’t find his old friend grew up to be sexy as sin. Coop can’t believe Noah—the only person he trusted with the guilt over his parents’ death—is back. And gay… Or that Cooper himself suddenly wants another man in his bed for the first time.

There’s no denying the attraction and emotion between them, but can they overcome the ghosts of their pasts to have a future together?