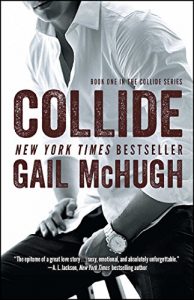 Her mind tried to fight a bloody battle against what her body already knew. She wanted him, and she wanted him bad.

On the heels of college graduation and the unexpected death of her mother, Emily Cooper moves to New York City to join her boyfriend for a fresh start. Dillon Parker has been sweet, thoughtful, and generous through Emily’s loss, and she can’t imagine her life without him—even as her inner voice tells her to go slow.

Then she meets Gavin Blake. A rich and notorious playboy, Gavin is dangerously sexy and charming as hell. Their first encounter is brief, but it’s enough to inflame Emily’s senses. When their paths cross again through an unexpected mutual acquaintance, she tries to deny the connection she feels, but Mr. Tall, Dark, and Handsome won’t let go so easily.

As she discovers Gavin’s pain-filled past and Dillon’s true nature begins to surface, Emily knows she must take action or risk destroying everyone—including herself. But how can she choose when she can’t trust her own heart?

Get Collide: Book One in the Collide Series by Gail McHugh at Amazon
Get Audiobook