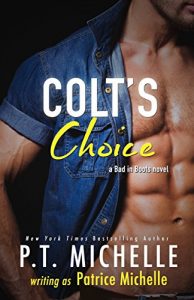 When Elise Hamilton inherits half-ownership of a ranch, it seems that her nomadic life has finally settled. There’s only one small snag. Her rough-around-the-edges co-owner doesn’t think she can handle ranching life. Annoyed by the arrogant cowboy’s lack of confidence in her abilities, Elise sets out to prove how invaluable she can be to Colt Tanner’s business. If only she could stop thinking about other parts of the man’s business, the kind that look really good in pair of chaps.

Colt has waited half his life to fully own the Lonestar ranch. He’s not about to let a city woman waltz in and take that away from him, no matter how sexy she is. Her sultry green eyes and kissable lips might draw him in, but he won’t repeat his father’s mistakes. Problem is, his brain might be ordering him to stay very far away from Elise, but his body is giving his brain one big FU.

Note: COLT’S CHOICE is novel length and meant for mature readers. All the books in the BAD IN BOOTS series are stand alone stories.