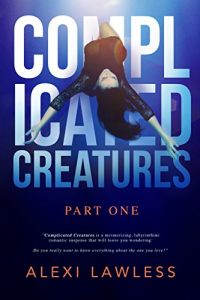 Samantha Wyatt heads up one of the most powerful private protection agencies in the world. As a former naval interrogator, she knows first-hand what danger looks like. But when the head-turning, savvy and challenging Jack Roman comes into her life like hot lightning, she’s drawn to him like she’s never been to anyone before…

She craves his touch, even though it weakens her.

She wants his love, despite the fact that she’s still haunted by another.

When a deadly rival threatens to take everything from her, Samantha is forced to rely on the help of Wesley Elliott, the first man she ever loved, and the only man she could never forgive…

With surprising twists, spine-tingling turns, and an adventure that takes you around the world, Alexi Lawless offers up a taut and intense read in the Complicated Creatures series—one that will leave you breathless and ready for more! Get ready to go deep into thrilling, powerful Complicated Creatures story!

Get Complicated Creatures: Part One by Alexi Lawless at Amazon
Get Audiobook