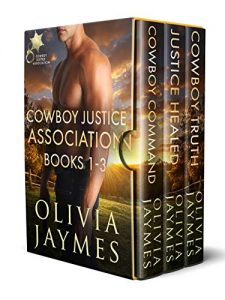 Cowboy Command:
One minute Katie is eating lunch with her sister, the next she barely escapes a car bomb meant to kill her. Luckily, Federal agents are going to give her a new identity until she can testify against the man who wants her dead. She’s not thrilled about being sent to a small town in Montana to hide, but she wants to stay alive.

Sheriff Seth Reilly is doing a favor for an old Army buddy. He’s promised to watch over a woman whose life is in danger, but he didn’t plan on her being so young and beautiful.

When danger finds Presley, Seth will risk everything to keep her safe until she can testify. Will Presley get her old life back or start a new life with Seth instead?

Justice Healed:
Dr. Madison Shay has left Chicago and moved back to her small town roots to take over her father’s medical practice. She’s not the skinny, gawky red haired, four-eyed girl any longer but it sure feels that way.

Sheriff Tanner Marks might have been the captain of the football team years ago but things aren’t as rosy now. He has a son who hates him, and an ex-wife who is about to marry a man Tanner thinks might be a criminal.

Cowboy Truth:
Sheriff Logan Wright might be the sexiest bad boy Ava Hayworth has ever seen but she’s not interested in the least. All she wants is to help him solve the murder of a prominent local citizen by a mysterious vigilante serial killer. A fling with a smokin’ hot cowboy cop isn’t in her plans.

Logan doesn’t need a mystery writer who thinks she’s a detective, trailing after him while he tries to do his job. She’s smart and cute, but he doesn’t want her to get hurt. She’s the first woman he’s known who has kept her promises. It shakes him to his very core, challenging long held beliefs.

Everything Logan wants, but never thought he could have, is within his grasp. With the help of Ava and his friends, he’s going to have to fight the past if he wants any kind of a future.