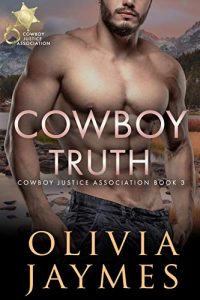 People will do desperate things to keep the truth dead and buried.

Sheriff Logan Wright might be the sexiest bad boy Ava Hayworth has ever seen but she’s not interested in the least. He can have every other woman in town and probably already has. All she wants is to help him solve the murder of a prominent local citizen by a mysterious vigilante serial killer. A fling with a smokin’ hot cowboy cop isn’t in her plans.

Logan doesn’t need a mystery writer, who thinks she’s a detective, trailing after him while he tries to do his job. She’s smart and cute, but he doesn’t want her to get hurt. By him or the investigation. He enjoys the pleasures of women – many women – and that’s not going to change.

But as painful secrets are revealed, Logan begins to depend on Ava for more than just friendship. She’s the first woman he’s known who has kept her promises. It shakes him to his very core, challenging long held beliefs.

Everything Logan wants, but never thought he could have, is within his grasp. With the help of Ava and his friends, he’s going to have to fight the past if he wants any kind of a future.

Publisher’s warning: This book contains sexy scenes including a Harley riding, bad boy sheriff who knows how to dent the wall with the headboard and make his woman very, very happy.