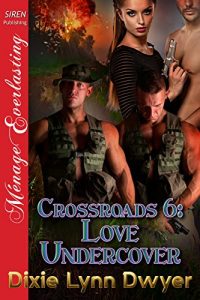 [Siren Menage Everlasting: Erotic Menage a Quatre Romantic Suspense, M/F/M/M, HEA] Sacha Smith is out for justice. They killed her partner and half of the undercover team. The rest are being held hostage and about to be executed but she escapes with a microchip that can help take down the terrorists’ entire operation. She’s running for her life and needs to find someone she can trust to help her get these things to the United States, but she’s injured and stuck in a foreign country with no backup. She can’t trust anyone, not even her commander or her government because this mission was strictly off the books, unknown to anyone but her team and two other men. So she contacts the only man she knows she can trust, her brother Franco. She has a feeling she knows who he’ll call but she doesn’t have time to think about past emotions and a love triangle gone badly. She needs to survive, and saving the Unites States of America from another terrorist attack has just become priority number one. When someone she thinks she can trust tells her that the three men who saved her and protect her are really working for the bad guys, it becomes a game of love undercover. She never expects to lose her heart or love so deeply but will she have to lose her life to save them? ** A Siren Erotic Romance

Get Crossroads 6: Love Undercover by Dixie Lynn Dwyer at Amazon