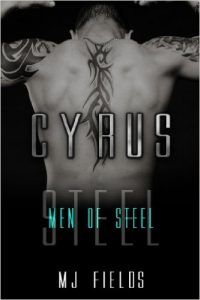 Book 2 in the Men of Steel series
Meet Cyrus, the oldest of the Steel brothers. He’s strong, independent, and damaged. But don’t feel sorry for him, Cyrus likes his life just the way it is. No rules, no commitments, and no more than 3 times with the same woman.

A child of the foster care system who can’t remember ever being loved or feeling safe, Tara brings out the protective alpha male in Cyrus. And as much as he hates to admit it, something else. Something he wishes he didn’t feel. Something that could weaken his resolve.

As they spend more time together, Cyrus’s three-times-only-with-no-strings rule disintegrates. But Cyrus hates being vulnerable. He hates feeling weak. And so he does what any red-blooded man afraid of commitment does, he lets Tara slip through his fingers, rather than let her all the way in.

But with him, Tara is a fighter, and she’s not about to give up.

CYRUS is book 2 in the bestselling erotica series MEN OF STEEL by MJ Fields.

Get Cyrus at Amazon
Get Audiobook