You are here: Home / Price / 99 Cents / Dance for the Billionaire 1 by Jewelle Moore 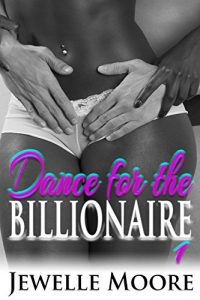 All that stands between her and financial freedom is one…lap dance.

Equally worried that her brother would be lured into one of London’s notorious gangs and for her sisters’ safety while she works evenings at a supermarket, Chantelle Payne takes a job as an exotic dancer at an exclusive men’s club until she completes her degree. Her only rule: no lap dances.

Billionaire property developer Dominic O’Brien visits the club to conclude a business deal and is captivated by Chantelle’s sexy dance moves. He offers an obscene amount of money for a private lap dance and the chance to get closer to the stunning young woman.

Chantelle notices the sexy tycoon while on stage and feels the sparks that fly between them. When he offers an amount large enough to take care of her financial problems and enable her to immediately quit the job, she breaks her rule.

Totally inflamed by the lap dance, Dominic offers a matching amount for Chantelle to sleep with him. Infuriated, she flees from him and the club. He pursues her but loses her in the ensuing car chase. Not one to give up easily, when he discovers that the club owner doesn’t know Chantelle’s real identity, he hires several of the country’s best private investigators to track her down. But she’s disappeared without a trace.

She haunts his days and nights for the next five months. And just when he’s given up hope of ever finding her, she walks unexpectedly back into his life.

Get Dance for the Billionaire 1 by Jewelle Moore at Amazon