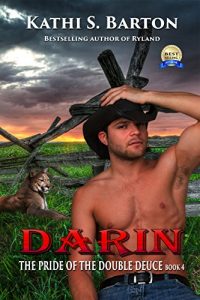 Mercedes Crosby is a veterinarian and a damn good one. She’s just what Susie Douglas needs on her horse ranch, and Mercedes wants nothing more than to take the job and get out from under the thumb of her ex-husband, Nash Crosby. But trust in people is something Mercedes lost the moment Nash forced her to marry him at gunpoint. If the job sounds too good to be true, it probably is….

Darin Douglas is struggling to make ends meet as he opens his new bed and breakfast, The Douglas House. He has his first booking coming in in a few days and wants everything perfect, so he brings the family in to sample the first menu and to show off his new place. His brothers bring the already reluctant new Vet with them to dinner to meet the rest of the family, Darin and Zack. Darin met the Vet’s young daughter earlier that day and already loved the little girl, but he is surprised but not disappointed when his cat recognizes Mercedes as his mate.

Mercedes, on the other hand, is scared witless. She had found out a few hours before that paranormals really existed and she was living among them. Now, this big handsome brute is telling her that she belongs to him and his cat…ah, hell no.

Nash Crosby isn’t finished with his ex. They aren’t divorced until Mercedes and that brat of hers are dead….

Get Darin: The Pride of the Double Deuce by Kathi S. Barton at Amazon