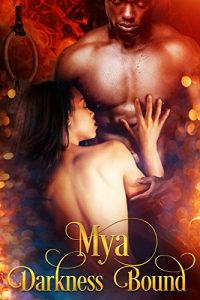 Once she was known for capturing demons, but a half-demon herself, Malice left the Order of Sorcerers that had been her family. Using her aptitude in binding, she offers restraint to protect those whose blood yearns for chaos. Hers is a proactive choice, to diminish the need for violence in the creatures of the nethers before it becomes an issue rather than after. So what if her methods involve a carnal edge?

The demon Naeem refuses to believe that Malice is anything other than a revolutionary, one who would share his dream of forging a union between demons and sorcerers. That she has ostracized herself from both the nether realms and the higher planes just doesn’t fit with what he has heard. Surely the woman who saved him as a child is all that his dreams have depicted her as and more! That he dares her to do more, to be more in the struggle to bridge the demon world and the world of sorcery, only becomes more complicated when he is framed for crimes against sorcerers.

In the midst of a conspiracy, Malice finds herself drawn back into a fight, not just to mend the ties between her two races but to save once more the demon whose bond she cannot deny.

Get Darkness Bound by Mya Lairis at Amazon