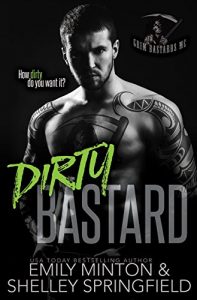 She’s a biker chick with an edge.
Daughter of an MC President, Trix Slade is used to living on the wild side, but nothing prepares her for being kidnapped by the Grim Bastards MC. Hell bent on getting back home, Trix will do anything to get away from her captors—anything. There’s only one problem. Boz is as sexy as he is wild—a tempting combination for a woman like Trix.
He’s a bastard with a soul.
The Bastards’ president, Boz Creed, wants to bring Trix’s father down and knows the best way to get to him is by using his precious daughter. Determined to get the revenge he seeks, Boz is willing to do anything to get what he wants—anything. There’s only one problem. Trix is as sexy as she is stubborn—a deadly combination for a man like Boz.
Can love between two rival clubs survive without someone taking the ultimate fall?

Each book in the Grim Bastards MC series includes an HEA and can be read as a standalone.
Dirty Bastard includes sexual situations and graphic violence. Not suitable for anyone under 18.