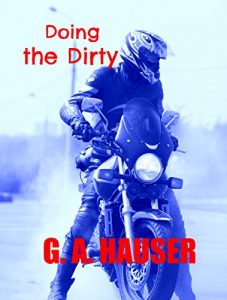 In book 18 of the Action! Series, Mark Antonious Richfield, Top Model, and ad executive for large firm in LA, was living his sexual fantasies in his head, much to the chagrin of his former LAPD police officer/advertising coworker husband, Steve Miller.
When the media begins to spin sordid gossip and lies, the men of the Action! Series, battle jealousy, emotional setbacks, and of course, fight for their true love.
While Alexander, Mark’s twenty-six year old son, begins to rocket to superstardom, his forty-six year old LAPD police captain husband, Billy Sharpe’s own ambitions to be the top cop begins to create more friction between the two.
With tempers flaring and Mark getting a motorcycle endorsement for his new Red cologne ads, everyone is once more, in a tailspin.
Doing the Dirty, fun or flirting with disaster?
Are you ready for another wild ride? Hold on to your helmets, because the men of the Action! Series are back for more adventure.

Get Doing the Dirty: Book 19 of the Action! Series by G. A. Hauser at Amazon