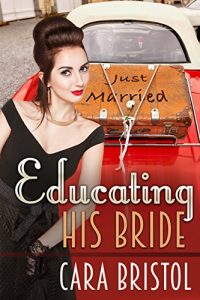 From college coed to a professor’s naughty bride…
It’s the 1950s. Never much interested in her studies, Margaret Atwater attends college hoping to graduate with an Mrs. degree instead of a bachelor’s. When she catches the eye of English Professor Henry Thurston, she’s thrilled to marry him, drop out of school, and begin a new life as a married woman and faculty wife. However, Henry is a kinky man who has much to teach his eager young bride—in, and out, of the bedroom. As Mrs. Henry Thurston, Margaret’s sexual education has just begun.

Get Educating His Bride by Cara Bristol at Amazon