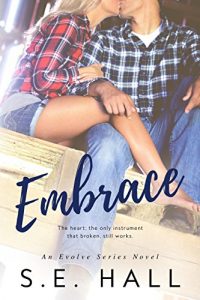 After the romantic gesture of the century, Evan Allen is now faced with no friends, ineligible to play ball… and too late to get the girl.

He’s starting over alone and doesn’t know quite how to proceed, until certain members of “The Crew” step in, taking him under their wing.

It doesn’t take the ladies long to notice him either.

And Evan soon learns… Sometimes life doesn’t go as you had planned.

Sometimes… it goes even better.

Get Embrace (Evolve Series #2) by S.E. Hall at Amazon
Get Audiobook