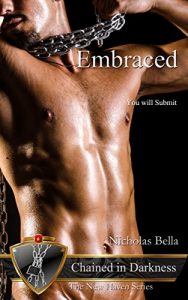 I’ve been betrayed by someone I trusted. Because of him, I was captured by my loathed enemy: The vampires. Right now, the sun is still high in the sky, but I know when it sets, I’m as good as dead. They can’t wait to get their fangs into me. I guess some would say I have it coming. I did raise a lot of hell with my Resistance crew, and I was planning on raising a hell of a lot more at dawn before I was sold out by Jonah. The vampires, werewolves and dragons, have been trying to track me down for months and I’d always been two steps ahead of them.
*Laughs* I guess my number is up. I just hope they make it quick. You see, the vampires in my reality aren’t the romantic lot you read about in books. They don’t sparkle or hang out at high schools with their teenage girlfriends. Hell no, vampires are brutal, calculating, sadistic and bloodthirsty. As a matter of fact, all of the monsters are! That’s how they were able to take over the world so easily and change an entire civilization to suit their needs. Whatever happens, I know it’s not going to be pretty, so I’m preparing myself for the worst. May God help me.

Warning: This novelette series contains hardcore sexual situations between men, not meant for sensitive eyes. I’m talking crude, lewd and full of attitude. This series will most likely either offend you or get ya revved up. This series isn’t going to be pulling any punches whatsoever, so you’ve been warned. Mature Adult Content meant for readers looking for something dark, taboo, sexy, and unapologetic in their paranormal erotica. This is NOT a romance. This novelette is approximately 13400 words.

Get Embraced: Chained in Darkness – (Episode One of Season One) by Nicholas Bella at Amazon