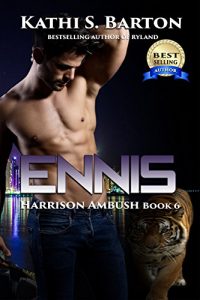 Ennis Harrison was a small town doctor, and the last of the brothers to find a mate. He figured since all his brothers had found mates within the last year he had to be next, and he’d made up his mind that he was going to do this right. He wasn’t going to make the stupid mistakes his brothers did. The first thing on the agenda would be to find a house. He had one in mind if he could get it at the right price.

Lisa Collins had been around a very long time. She wasn’t human, but she wasn’t a full blown vampire either, the vampire blood running through her veins had given her immortality…to a point. Age or sickness wouldn’t kill her, but an accident was another story entirely. When she accidentally cut herself from palm to elbow, she was trying not to alarm her friend Georgie, but she was dizzy with blood loss.

The house was almost too good to be true, but it was his and he was proud of it. The entire family had a lot to celebrate, including his brother’s birthday. When Ennis was called away from the celebration for an emergency, he knew the injured woman was his mate. Determined to do things right the first time, he took her home with him.

The house had its own secrets—a dark and gruesome history. Things weren’t always what they seemed. Women were disappearing one by one. Who could they trust? Were any of them safe? Find out in the final installment of the Harrison Ambush—Ennis.

Get Ennis: Harrison Ambush by Kathi S. Barton at Amazon