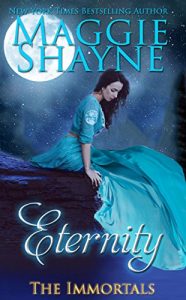 300 years ago, Raven St. James was hanged for witchcraft. But she revives among the dead to find herself alive. She is an Immortal High Witch, one of the light. A note from her mother warns that there are others, those of the Dark, who preserve their own lives by taking the hearts of those like her.

Duncan Wallace’s forbidden love for the secretive lass costs him his life.

300 years later, he loves her again, tormented by hazy memories of a past that can’t be real. She tells him of another lifetime, claims to be immortal. Though he knows she’s deluded, he can’t stay away. And the Dark Witch after her heart is far closer than either of them know.

If you liked OUTLANDER, or HIGHLANDER, you will LOVE this series.

Get Eternity (The Immortals Book 1) by Maggie Shayne at Amazon