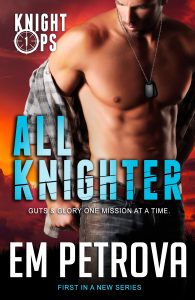 Ben Knight has held a lot of titles—devoted son, big brother to six siblings, captain of the Marine’s Fleet Anti-Terrorism Security Team and his best-known gig of Louisiana playboy. But the ladies are just going to have to understand that his time’s stretched thin when he takes on the leadership of a new special ops force.

With his brothers as sidekicks.

Worst idea ever. But a decision Ben has no control over, and control is his middle name. Actually, it’s Bartholomew but thank God nobody knows that, except one pretty little brown-eyed Cajun girl with access to too much information about the Knight family and an oh-so-sweet sassy mouth. A mouth that he’s never forgotten even though it’s been three months since he’s last had her in his bed, against a wall and over a barstool.

Dahlia was a victim of the notorious Ben Knight’s love-’em-and-leave-’em lifestyle, and it ticks her off that she can’t forget him. Maybe it’s that bad-boy smile or the way he looks like sin poured into low-slung jeans. When he comes sniffing around again, her libido makes her jump into action—and straight into a world of secrets surrounding Ben. Leading her to question whether her heart can withstand a life with a man who might not be alive tomorrow.

Get All Knighter at Amazon