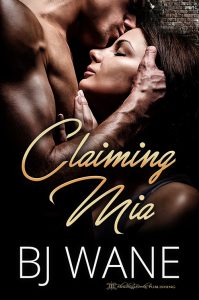 Newly divorced Mia Reynolds doesn’t like Chief Nolan MacGregor. His
arrogance gets under her skin, but it’s her body’s instant reaction every
time he levels that cobalt gaze upon her or hints at giving her what he
keeps insisting she wants that really gets to her. After her husband’s
betrayal, she’s sworn off getting involved with anyone, and certainly isn’t
going to trust her fragile heart with the town’s reformed bad boy.

Nolan wants Mia and refuses to let her prickly stubbornness stand in his
way. Once he entices her into an affair and shows her the benefits of
submitting to him, her off-the-charts responses prove he was right all
along – she is the one for him. When his investigation into an illegal drug
ring implicates Mia’s business, he never stops believing in her innocence.
When the Feds go around him, Mia refuses to believe he hadn’t been with her just to keep an eye on her and her nursery for proof the drugs were coming in on the trucks carrying her landscaping orders.