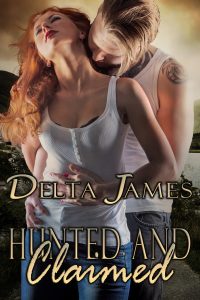 She thought she could run from her mate. Then he lassoed her.

Riley decided years ago that she would be better off on her own, but when the alpha of the local pack finds out there’s a lone wolf causing trouble on his turf he takes matters into his own hands.

As far as Cameron Nichols is concerned, Riley will be joining his pack whether she likes it or not. Her only choice will be whether to submit to his authority with or without needing to be stripped bare and spanked over his knee until she is kicking and crying and promising obedience. When she chooses the latter, the Navy SEAL turned cowboy is more than happy to oblige.

But Cameron knows instantly that Riley isn’t just a feisty female in need of an alpha’s firm hand. She is his mate, and she knows it too, despite her best efforts to deny it. No matter how many times she tries to run, he will always chase her down, punish her thoroughly, and then mount and claim her so roughly that all she can do is scream her helpless, shamefully intense pleasure into the pillow as her body betrays her and surrenders ever more completely to his demands.

Get Hunted and Claimed at Amazon