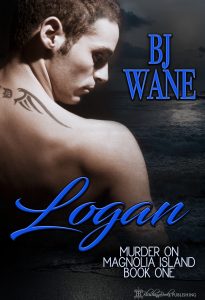 Get Logan, Book One, Murder on Magnolia Island trilogy at Amazon