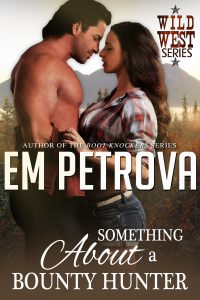 n the mountains of Wyoming, the man in the black hat is legend. After all, his reputation for being the best bounty hunter this side of the Rockies precedes him. Which is why Wes Roshannon has exchanged his Stetson for leather and a helmet and infiltrated a biker club. What he never expects is to find the fugitive he’s been searching for isn’t a member of the allied biker chapter but right under his nose.

Or rather, underneath him—he’s had her in his bed for the past two months, screaming out his name.

Most members of the Bighorns biker club have a shady past, and Stormy is no different. With the club, she’s found her place in the peaceful mountains of Wyoming. Besides feeling like she has a real family for the first time in her life, Stormy knows she’s safe, protected by her new brothers and sisters. And her biggest champion, the huge sexy Harley-lover named Wes, would never allow her to be taken if her identity is ever revealed.

When Wes discovers he’s entangled with a woman on the run, he’s gutted, but he’s never let his emotions get the best of him when hunting a fugitive. He can’t believe Stormy—otherwise known as Isadore Bonner, the rich daughter of an internet mogul—committed any crime let alone what she’s been running from the past year. Taking her in means breaking her trust. But it seems they both have secrets to reveal—and hopefully their relationship can survive the stakes.

Get Something About a Bounty Hunter at Amazon