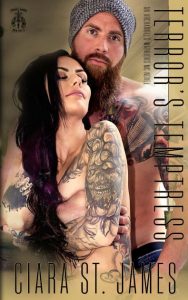 Archangel’s Warriors MC: Brothers by choice, not blood. Born to ride until they die. All they wanted was to ride free until lightning strikes them without warning. Consumed by desire, surrounded by danger, they find the “one” who will consume, enchant, frustrate and ultimately love them. They only see each other. When Archangel’s Warriors find the “One”, they don’t back down, they don’t ever stray and they will do anything to protect their women, even kill for them. Their women are strong, feisty, and dangerous. They are each other’s every fantasy come to life. The sex is hotter than anything they’ve ever known. Those who stalk their club or threaten their women had better beware!

Terror was the president of the Dublin Falls Archangel’s Warriors MC. He wasn’t looking for a woman. He could have any woman he wanted at any time. Until one night after a dangerous mission, Harlow unexpectedly walks into his life. She was tough, beautiful, sexy, deadly and the daughter of another chapter president. The club has an enemy stalking them already. And now she enters his life with her own enemy. He plans to win her for himself, but first he’ll have to keep her father from killing him and their enemies from taking her away from him. Because he’s found he can’t live without his Temptress.