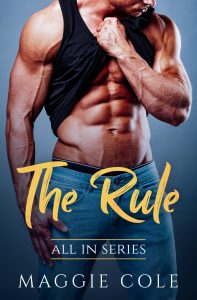 A whip-smart businesswoman with one rule she’ll never break. A billionaire entrepreneur with a dangerous past.

Olivia “Liv” White is poised to take over eligible bachelor Tom Marko’s companies, but he wants something closer than a business relationship. Much closer. It doesn’t hurt that Tom’s handsome, a basketball star with a body to match, and just the right kind of aggressive.

When Tom tricks Liv into spending four days with him at his Colorado mountain home, Liv’s rule is tested at every turn. She doesn’t know if she can resist Tom’s advances—or the feel of his hands on her.

Just as the hunger between the two of them reaches a breaking point, Tom’s past comes crashing back. The two are thrust into danger, and Tom and Liv have to decide what they’re willing to sacrifice to be together.

THE RULE is the first installment of the All In series. At 95,000 words, this sizzling novel features a love-at-first sight romance and a guaranteed HEA.

Get The Rule: All In Series Book 1 – A Billionaire Romance Love Story at Amazon