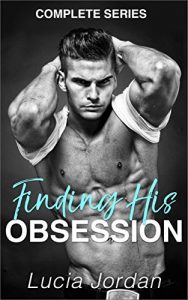 There have been very few times in Bailey’s life that she remembers being happy. From growing up in the foster system to graduating high school. There were no happy words of encouragement for her. After a series of tragic events, Bailey closed herself down. If she didn’t care about anyone, she couldn’t get hurt. Then one night everything changes. He walks through the door of the diner. With eyes the color of the ocean, she feels like he can see every little secret she’s trying to keep hidden. The second he speaks, the deep timbre of his voice sends a rush of excitement through her unlike anything she’s ever felt before. There is something about him; something dark and sexy. The pull she feels is undeniable. The burning ache he starts in her body with a simple look is unbearable, but who is he? Bailey never could have guessed that the night Ellington Rosswell walked into her life was the night that nothing would ever be the same again.

Get Finding His Obsession – Complete Series by Lucia Jordan at Amazon