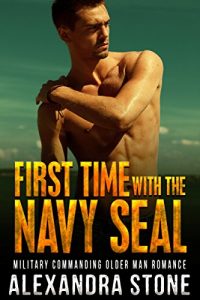 Will you let this commanding officer take charge?

When Myranda attends her father’s family reunion in Texas she is expecting it to be unusual and different. She is delighted when she meets a cowboy that shows her the romantic side of two stepping, but she isn’t expecting that this handsome stranger is actually a Navy Seal officer. Not only is he arrogant and cocky, but it turns out that he is staying at her father’s ranch until he leaves on his next covert mission. Now in close proximity she has to deal with the constant lust and desire for this military man that knows his way with women. Living in a world where he goes on dangerous missions on a regular basis has made him live his life to the fullest, indulging whenever he can. Myranda becomes one of those indulges. Until he does something that makes her cut him off, but not indulging her desires turns out to be more of a punishment for her then him.

This steamy novel is guaranteed to make your knees quake!

First Time With The Navy Seal is a short story with a happy ending.

Warning: This book contains Explicit content and is intended for adult eyes only!