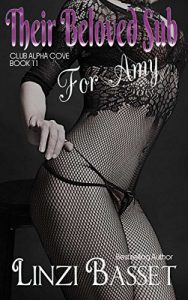 The Cutter twins were known as the “Badass” Dom’s at Club Alpha Cove, but at the same time all the submissives coveted their attention. There was one, however, who craved it, and then demanded it. Because they promised her, six years before that they would come for her. She waited for them. They never came.

Amy Dwyer was devastated when they didn’t come for her as they had promised and nearly made the biggest mistake of her life. Now, nearly seven years later, she realized she still wanted them. However, it was not going to be easy. Dax Cutter hated her and he made no secret of it.

Dax and Gunther were disillusioned by the one woman they had both wanted from the first time they met her. Dax hated her for what she did to them, to him and his actions pushed her away time and again, while he pulled her back with the other hand, helpless against the passion she awakened in him.

When a lethal situation developed with a stalker, their protectiveness overtook their distrust and brought them closer together. Will the lurking evil destroy their chance at happiness, or will the sweet, still innocent Amy bring them together?

A note from the author: This book is a love story that was threatened by misunderstandings and Dax’s pain that drove his actions. If you are a skimmer and mainly read dialogue, you are going to miss the inner conflict that Dax and Amy deal with throughout the first part of the book. Conflict that drives them to say and act in opposing directions to what their real feelings are. This story concentrates on these three characters and you will find none of the Masters you came to love in the rest of the series. I know you would have loved to, but they had enough of their own time, this story is Amy, Dax and Gunther’s, so please read this book as it was intended, a standalone story with no relevance on how the other Masters acted in the previous books.

Note: This book is intended for mature audiences. Please read the note in the beginning of the book and do not purchase this book if you find such content objectionable.

Get For Amy: Their Beloved Sub (Club Alpha Cove Book 11) by Linzi Basset at Amazon